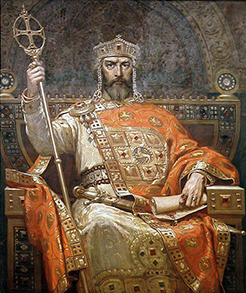 1. Bulgaria is the only country in Europe that hasn’t changed its name since it was first established. The Bulgarian state was founded circa 681 AD. This means that Bulgaria is a country with 1335 years old history.

3. Bulgaria has expanded twice its borders to the shores of Black, Aegean and Adriatic seas. – Bulgarian Empire is a term used to describe two periods in the medieval history of Bulgaria, during which it acted as a key regional power in Europe in particular, often rivaling Byzantium.

4. During the Golden Age of Tzar Simeon The Greatest the First Bulgarian State stretched gradually from Transylvania in the north, to the Aegean Sea in the south, from the Black Sea in the east and to the Adriatic Sea in the west. At this time Bulgaria gradually reached its cultural and territorial apogee, when it developed into the cultural and literary center of Slavic Europe, as well as becoming one of the largest states in Europe. By the reign of Tzar Ivan Asen II during the Second Bulgarian State the borders of the First Bulgarian Kingdom has been reinstated.

5. The Bulgarian army has never lost a single flag in battle. The flag of Bulgaria is a tricolor consisting of three equal-sized horizontal bands of (from top to the bottom) white, green and red. It was first adopted after Russo-Turkish War (1877-1878), where Bulgaria regained independence. The current flag was re-established with the 1991 Constitution of Bulgaria.

Cookies are short reports that are sent and stored on the hard drive of the user's computer through your browser when it connects to a web. Cookies can be used to collect and store user data while connected to provide you the requested services and sometimes tend not to keep. Cookies can be themselves or others.

So when you access our website, in compliance with Article 22 of Law 34/2002 of the Information Society Services, in the analytical cookies treatment, we have requested your consent to their use. All of this is to improve our services. We use Google Analytics to collect anonymous statistical information such as the number of visitors to our site. Cookies added by Google Analytics are governed by the privacy policies of Google Analytics. If you want you can disable cookies from Google Analytics.

However, please note that you can enable or disable cookies by following the instructions of your browser.